Just a little disclaimer, this FAQ was started before Steam announced they would be dropping the Greenlight program, but decided to finish it while it was still relevant.

Also note that given just how much I’ll be writing, the whole FAQ will NOT be completed right away, but instead given out in healthy chunks for others to read.

Over the past few months I have received several of e-mails of people interested in my projects, looking to do business with me, or as a grand majority, looking for a bit of advice for their own titles.

So much so, that I have actually answered MANY of questions on the several faces of game development (where on a side note, if you go to ME for advice, it means you ran out of options). Questions regarding the process of making, launching, selling, promoting, distributing and topics of the sort.

I am far from an expert on the topic, but hey, if it can help someone along the line, might as well talk about it. And also, I wish to expand this F.A.Q. to the point where I can be able to send these posts to whoever e-mails me some questions next.

And yes, I’m aware I have far from the largest audience and that hardly anyone will read this. But I say it is worth it if it helps at least one person.

Before we start I want to say one last thing. I mean it when I say there is A LOT to talk about, and so I decided to split this into several posts divided in topics, so if you are looking for answers on a specific area and you don’t find it, it will probably be in another post or I have yet to make a F.A.Q. about that topic, so please be patient. (Also, I will update each F.A.Q. as it is required.)

I will first begin with the topic I got the most questions about a little after I got my own title on Steam, Greenlight.

You can easily look the answer to the question of your interest by using CTRL+F and typing the code between the [BRACKETS].

If you don’t find the answer to a question yet, just be a little patient. Updates will be done and announced with dedicated posts. It is just that questions were planned ahead.

Let’s get the biggest question out of the way first, this is by far the go-to question people ask when they send an e-mail.

My case is of those you can call lucky (yes, it is a common trend in this industry). In fact, I did A LOT of things wrong when it came to launching my game on Greenlight, so many that in retrospective should’ve straight up killed the project. However as I also did some things correctly, I like to think it evened out and it came down to that luck.

WHAT I DID RIGHT:

WHAT I DID WRONG:

Summed up, my case is FAR from a formula to Greenlight success, but knowing the good and bad is vital when you attempt to launch your next title.

**What are the requirements to upload to Greenlight? – [GL2]

It is really just having the enough material to make up a PROFESSIONAL store page.

But if you want more concrete information, I took some screenshots of the requirements 😀

Screenshots and Videos (and Models if you Have Them) 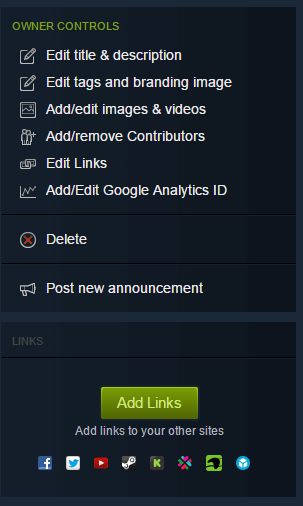 My suggestion, be sure to fill EVERYTHING, mandatory or not. It is really obvious who put some effort into their submission and who didn’t, and that does translate to upvotes believe it or not.

**Are there any things to consider about Greenlight? – [GL3]

Well, I would say it is mostly that you should really consider your uploads to Greenlight as a single shot to make that game get Greenlit.

Believe it or not, there is an active amount of players that keep an eye on submissions (myself included) and when you notice a single thing fishy or wrong with a given submission, you can be pretty sure it is a common feeling. What I mean by this is that if during the first hours of your submitted title you don’t show a decent trailer, a good set of screenshots, a well thought out description page and so on, you would’ve lost most of your potential up-voters.

If you re-upload a project for a “second-chance” on Greenlight, believe me, it isn’t going to go as smoothly as you think. Those that vote on Greenlight, visit it regularly, and duplicate submissions quickly turn previous up-votes to down-votes.

So think of your first exposure as the only time most of the people are going to give a view to your game, so make sure your page is prepared to give up a pretty good first and maybe only impression.

There isn’t a right answer to this one, and that comes down to the fact that the times in which the top games are selected is pretty volatile. The idea is that every month or two the top games on Greenlight are packed together as that period’s Greenlit batch. Needless to say, becoming part of that batch involves that a title had to compete with other games in terms of exposure, popularity and overall score before even being considered to be Greenlit.

Now, if you don’t want to take the time as a consideration for Greenlight difficulty, then let’s talk about votes:

How many upvotes do we need to get Greenlit? – [GL5]

Again, this has a lot to do with the moment in which the selection for a month’s or bimester’s Greenlit titles is made. Because if the next batch is selected too close in comparison to the last, it means that there was less time for voters to cast their up/downvotes, obviously meaning, that the amount of required upvotes would also be reduced.

Also, it is a good moment to say that the amount of downvotes is irrelevant to getting Greenlit or not, the question voters are asked is that if they are willing to buy your game, not how many aren’t. Generated money is obtained from sales and not failed sales after all. And before you feel down about the up and downvote ratio, keep in mind that it is normal to have something between 40-60% downvotes on your game (unless it is that spectacular of course), it is just a reminder that you can’t possibly please everyone at once.

Does the matter of votes matter then? Yes, it is just that you shouldn’t be aiming for a specific amount before being “done”, but rather attempting to get into the top 100 games ASAP, or at least, as close as possible.

Is there a time limit to get past Greenlight? – [GL6]

This is an interesting point, the short answer is no, there is no time limit for your game to get past Greenlight. HOWEVER, if your game didn’t make it to the Greenlit batch from the period it was submitted, it will be VERY difficult to get Greenlit. The moment a game reaches the second or greater page in the Greenlight section (or rather, gets pushed out of the front page) the exposure said project gets is drastically lower.

Greenlight is an implicit continuous countdown, you have a limited frontpage time in which you aim to get the greatest amount of upvotes as possible in order to get selected for a given period’s Greenlit batch. That is why you really should have all planned and ready, so the people that do get to see your page get impressed enough to upvote it, and so you can get as many impressions as fast as you can.

Again, there is no time limit, but at the same time, there kinda is.

Well that was quite the long post, and this was the first installment of the FAQ.

Make sure you check out the FAQ category in the blog for more interesting topics.

For now, that is all I have to say.

And as always, thank you very much for reading my blog :3