I know it might sound weird that someone wants to make a “Let’s Play” video about a puzzle game. I mean, usually these type of videos are more action focused. But well, given how big the world is, someone had to be the exception to that rule.

Some time ago my contact email was flooded with requests for video and written reviews, as well as other types of media about the game. And honestly, several were turned down because of the poor way they requested copies. (“Can you give me a copy for me and other 5 for my friends?”) Several were plain, cookie cut scam mails to begin with.

Which makes me ask myself, why on earth would you spend your time trying to scam a one buck game? Is it a routine to do, or you REALLY need the money?

Regardless, copies were given to those that showed to have some sort of credentials or at least proof of their work.

There was no discrimination to who they were or how big their audience was, I mean I’m not the glitterati myself, plus I don’t mind giving a $0.99 game here and there.

And so, it was our friend George one of those who has already showed it was well worth the copy sent. Here you go: 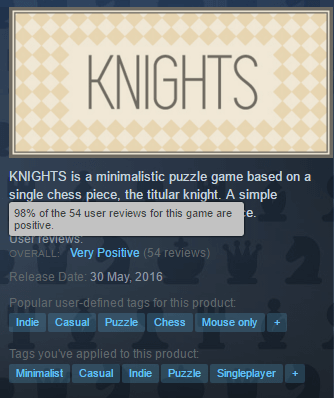 Again, I will never mind the size or audience of those that intend to make something out of what I made. Neither them nor I have a large audience, but that is no less reason to be flattered. This was made a post for a reason right? Thank you George!

On a side note, the game itself is doing very good, and one way to see that is by the reviews it has received during its first two weeks.

I mean wow, 98% positive reviews out of 54 reviews made? Color me impressed.

I’ve seen several games gather less reviews than that in their lifetime, so this is quite the achievement.

That is all from my part for now.

As always, thank you very much for reading my blog~ ;3