These games aren’t made with the same engine, by the same developer, or even with similar concepts in mind, but they are very creative in their own ways, which is why you should check them out.

Of course, writing a short description isn’t going to make justice to actually playing the games, so a video (or timestamp) will be provided to show gameplay, or game concept for those interested.

Without further ado, here are these absurd creations: 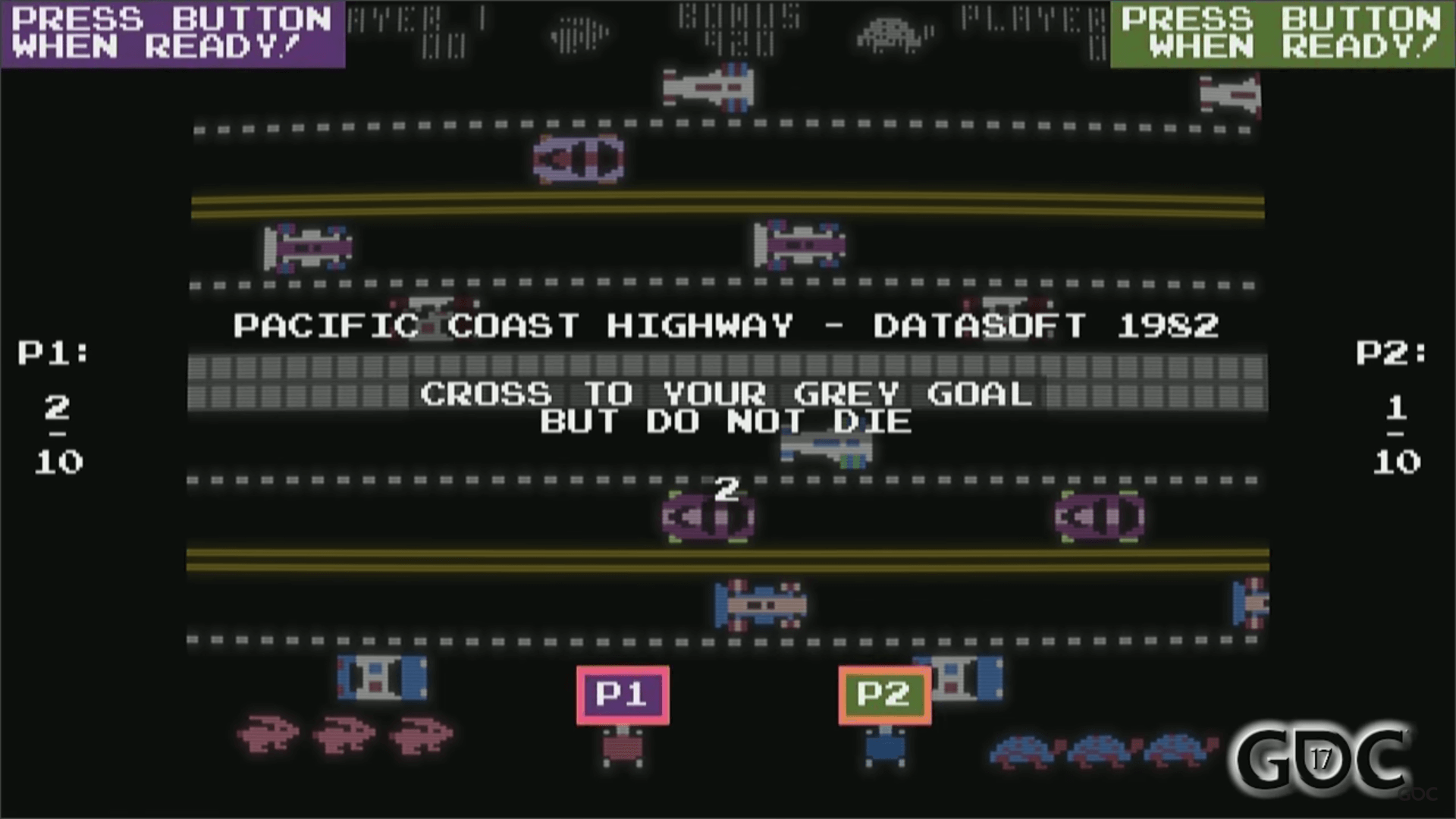 A warioware mix of pre-existing game moments, where the goal is to beat the other player in a 2-player game competitive moment, while aviding to specific special rules, to score a point, first to 10 wins.

The catch is, it is almost certain you have never some of these games at all… 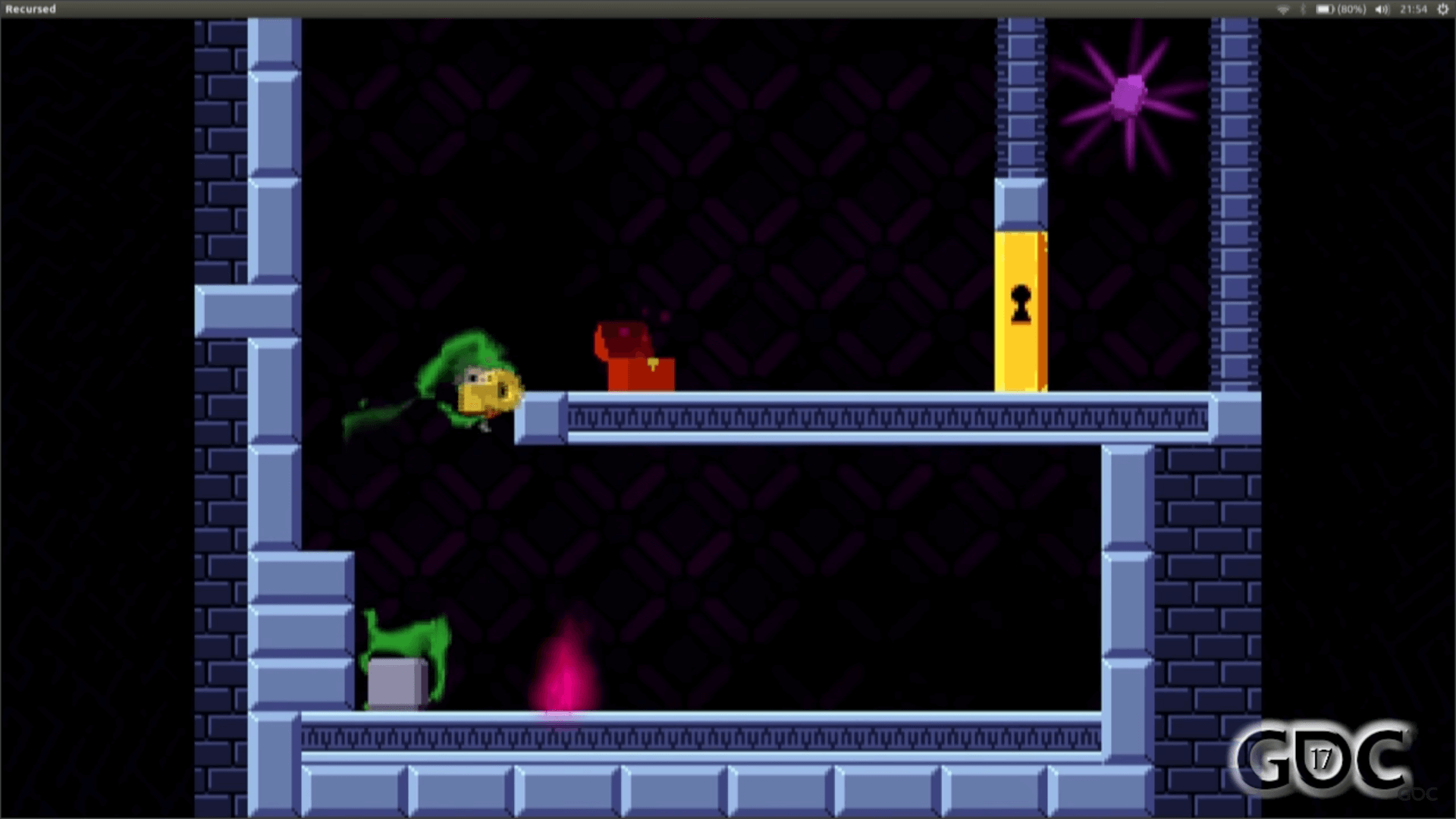 Given my lack of writing talent to describe such concept of a game, I’ll just copy paste the description from the developer himself:

A puzzle game where the rooms are items and the items are rooms. Get to the goal by moving, rearranging and duplicating rooms and altering the structure of the world. 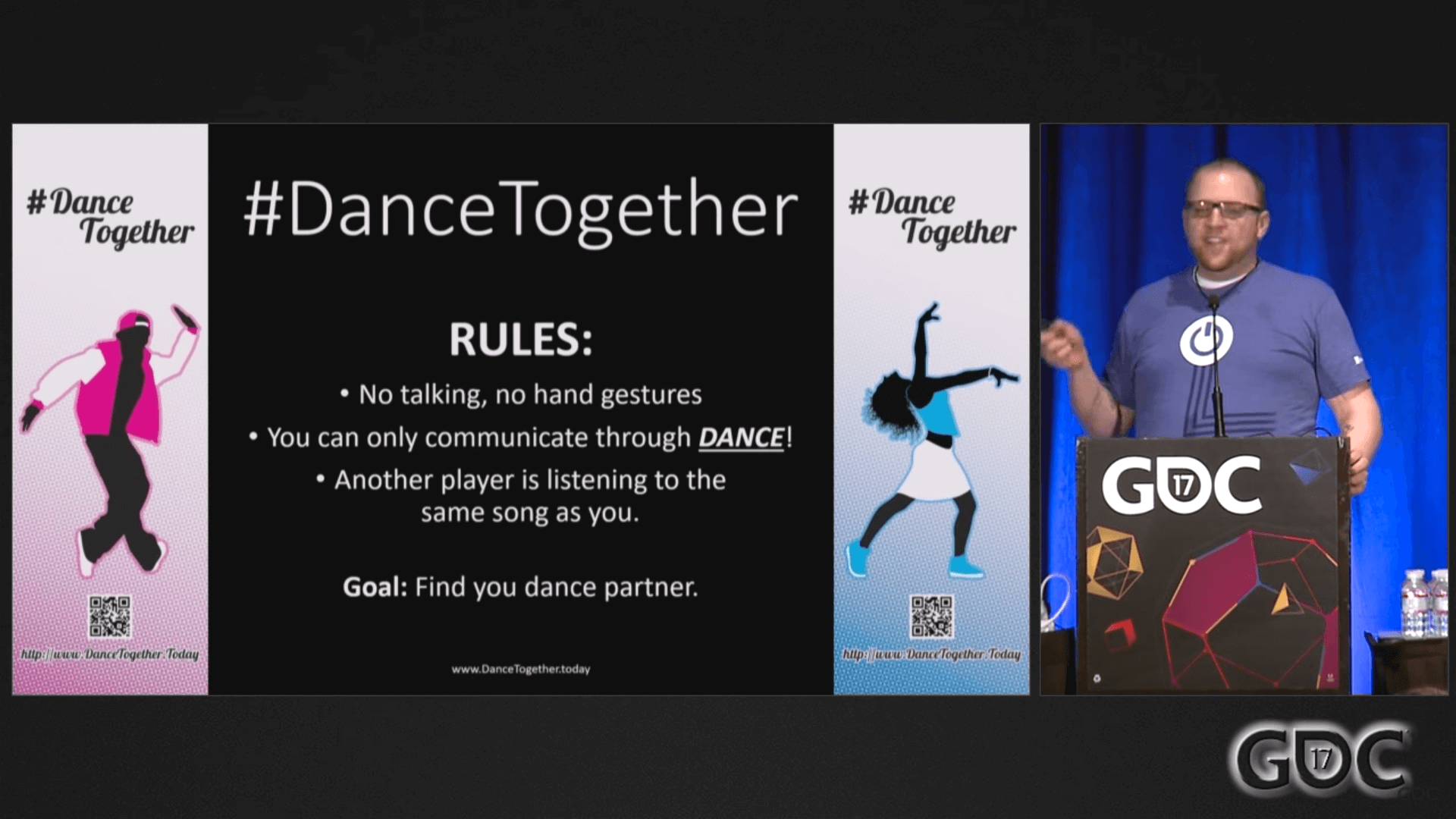 Gear up with your headphones and round up everybody, the dance party is about to start!

You and other player in the group will be listening to the same song… you just have to find that someone, by DANCING!

No speaking, no gesturing, just let your hips do the talking! 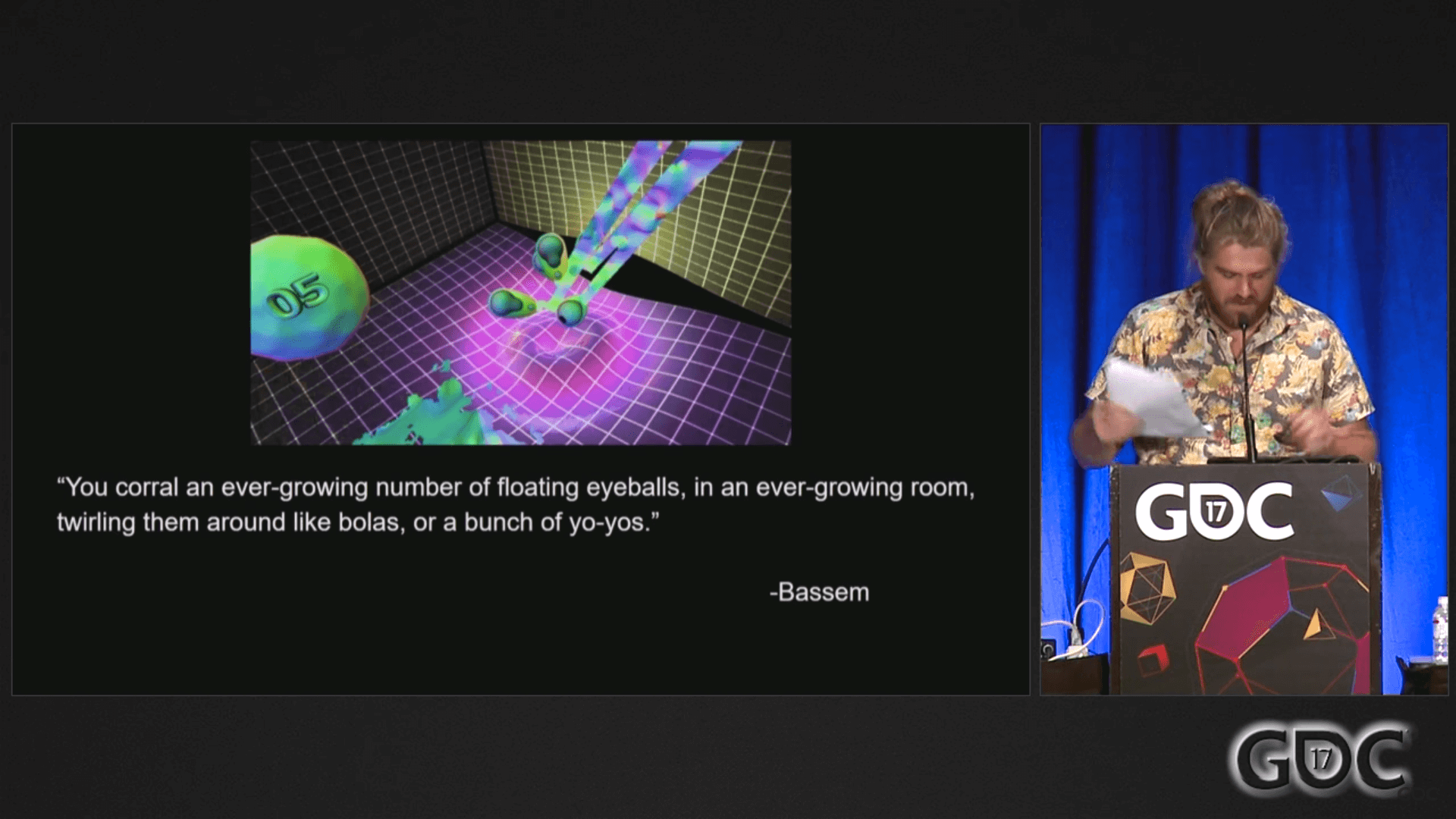 More than a game, a description of how many several different takes on VR implementations can craft incredibly creative pieces of art, that often get ignored for not following the pre-established status quo of game design.

The whole segment is dedicated to those VR projects that attempted something different, regardless of commercial success. 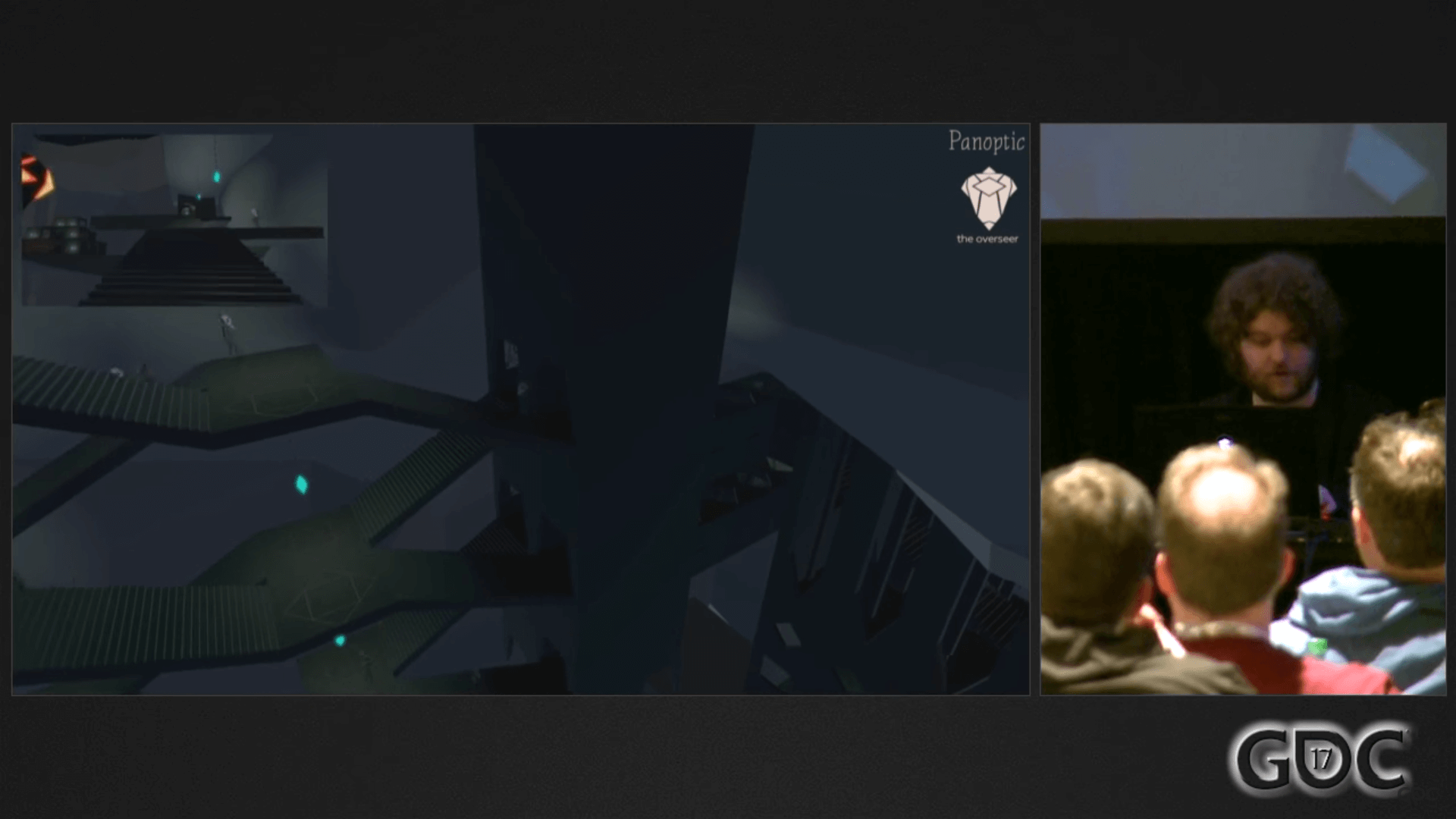 A 2-Player VS hide and seek experience in VR, similar to Garry’s Mod’s “Guess Who?” but a God-like view.

In a diorama sized environment, one player attempts to blend in with the rest of NPCs to avoid being noticed and shot by the other. 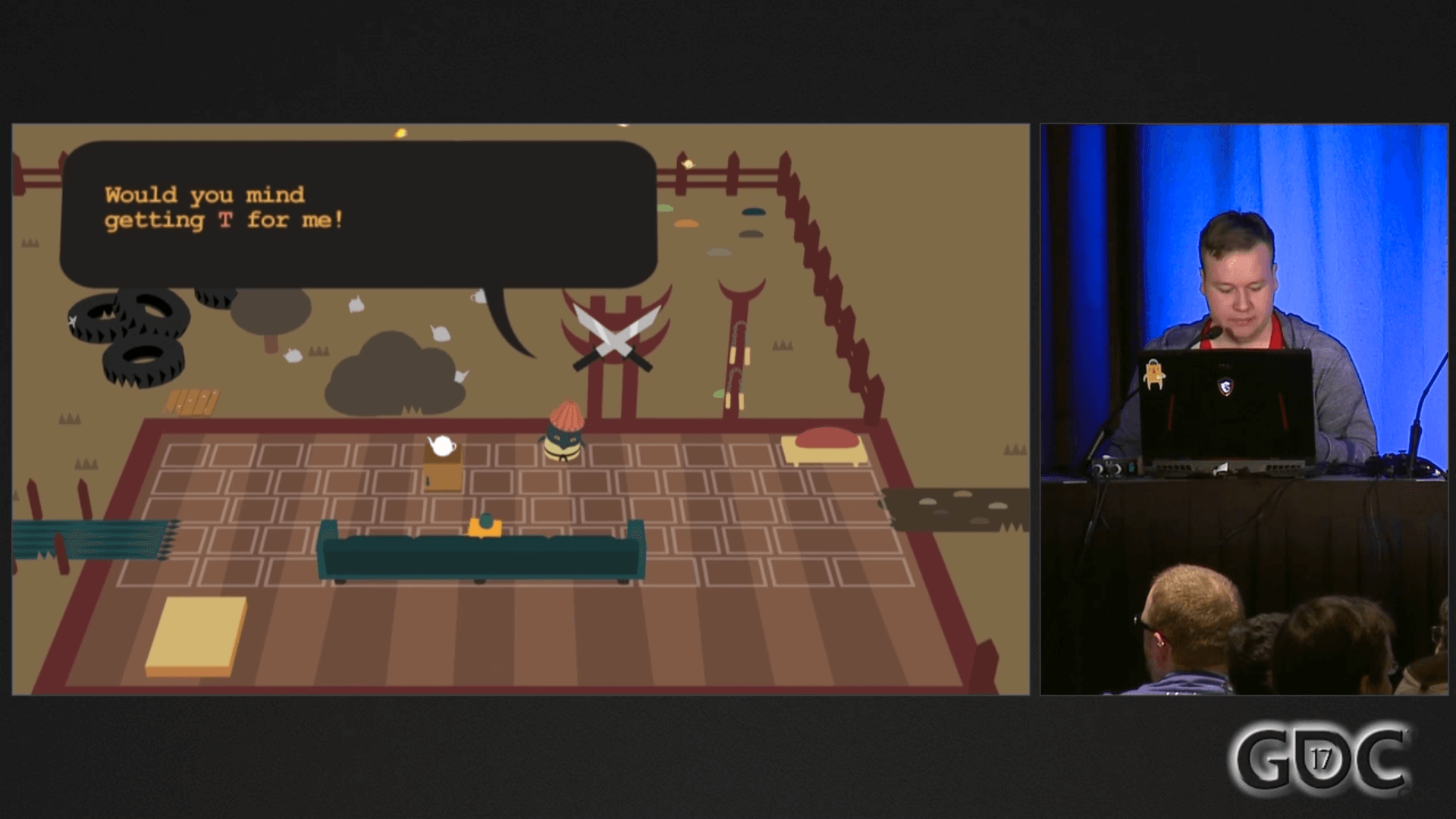 A game that uses every sinlge key in your keyboard.

A puzzle/adventure/meta game where all floor tiles resemble a button of a keyboard and you interact or move to the button you press. 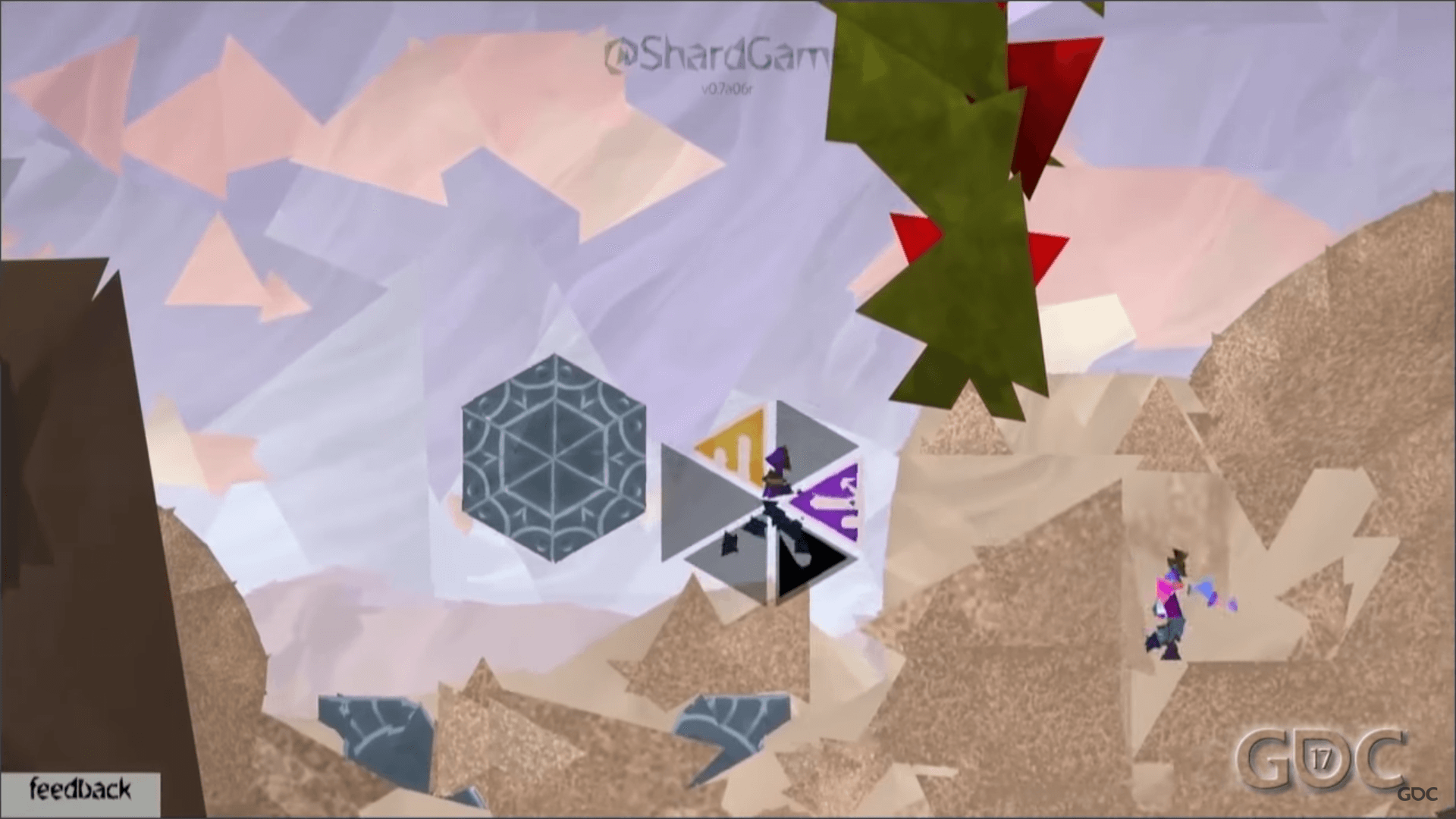 A cooperative platformer based around the idea everything is drawn in tris (triangles) by the GPU.

The environment, the player and even the menus, can break into a more abstract form of themselves in order to solve action based puzzles. 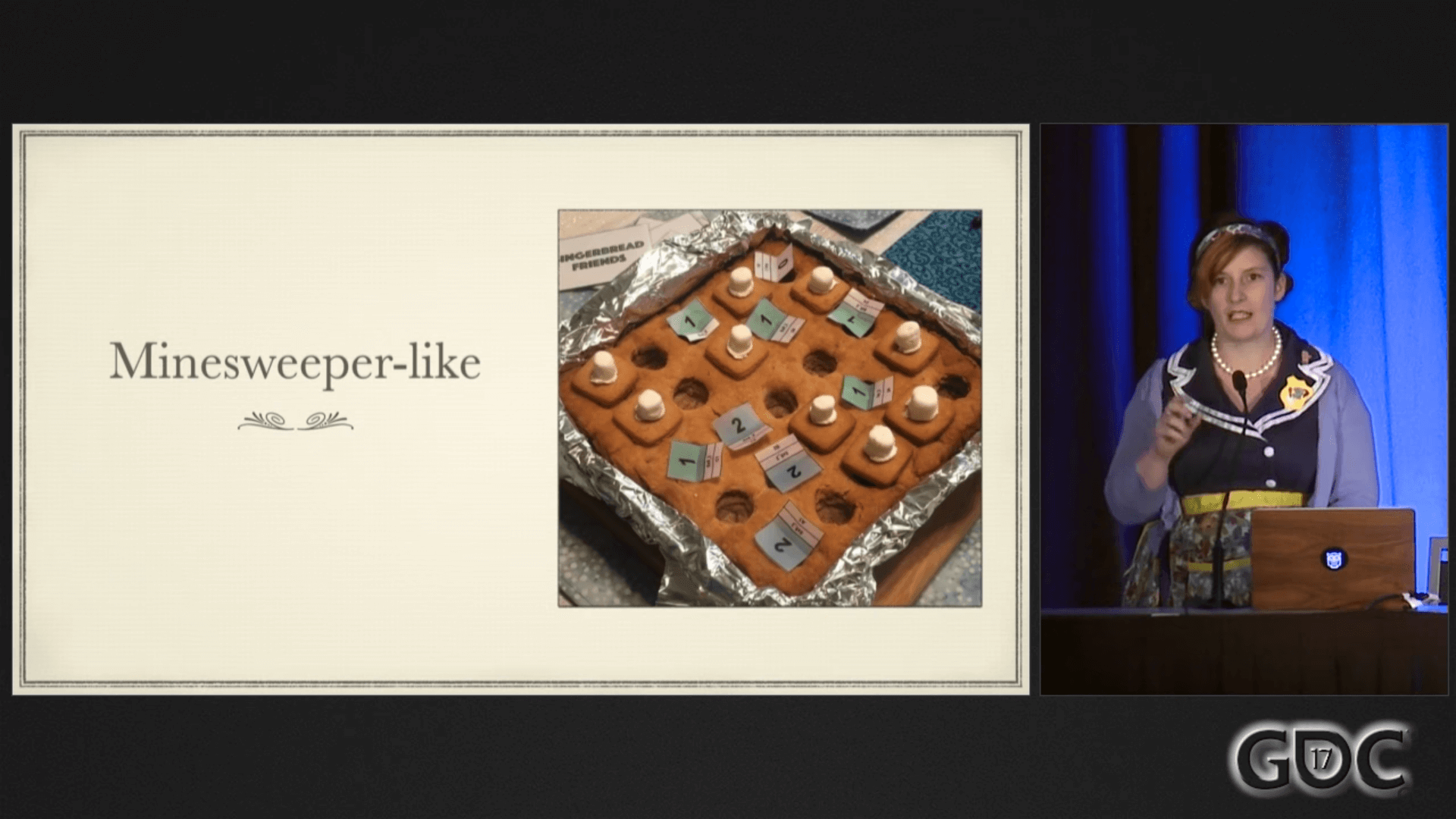 These aren’t video games, but rather part of a collection of real life food based games, that attempts to make use of food’s unique properties as mechanics.

A narrative puzzle game that mimics the feelings of being in a long distance relationship via letters in a table.

To progress through the game, you must fold the environment to be able to make it to the door at the end. Simple, but extremely complex. 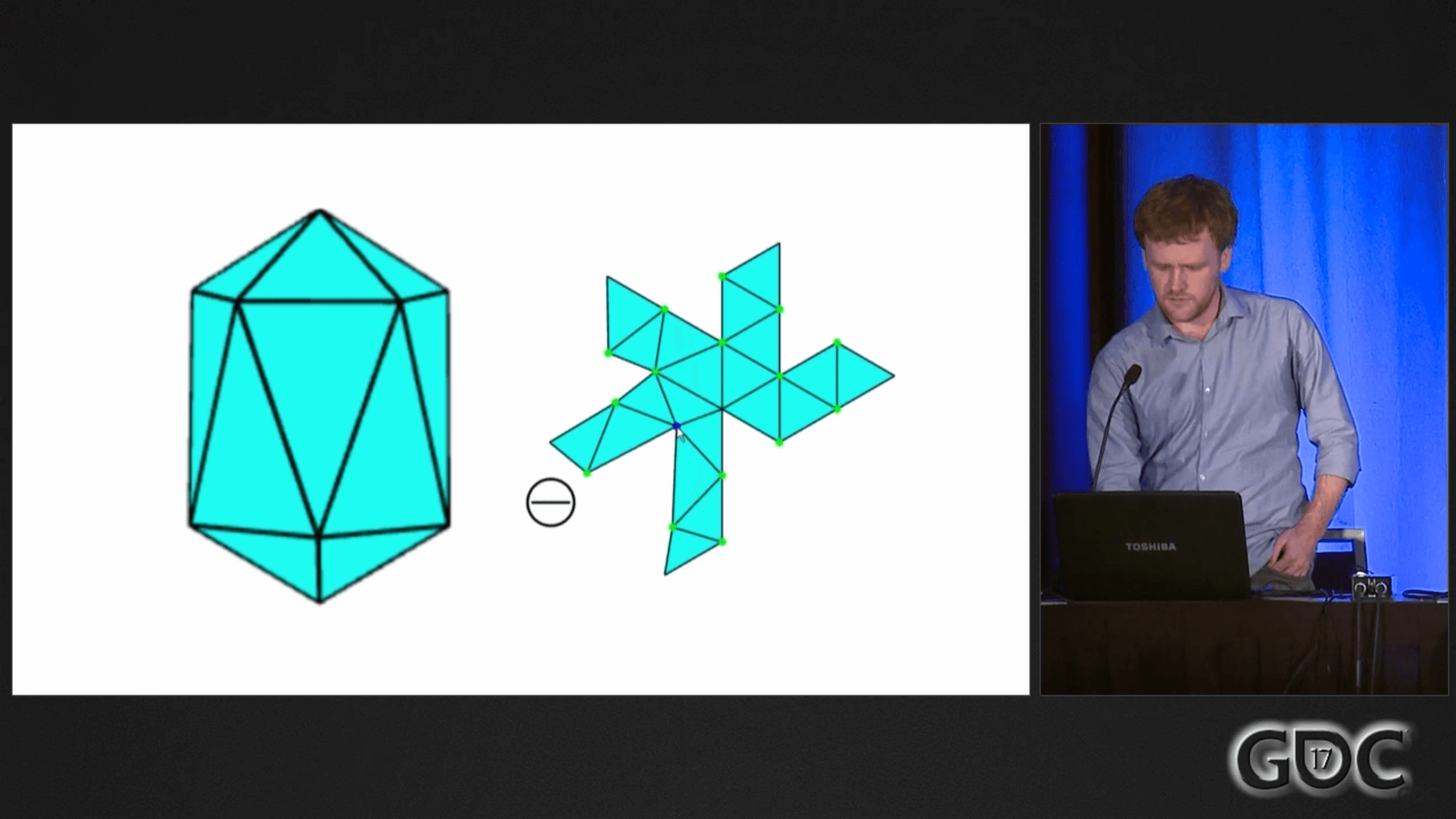 Have you ever wondered what viruses looked like? Now, wasn’t that quite the specific question?

Well, in case you were wondering, all of them follow a pattern, which can be simulated via this un-named software experiment. 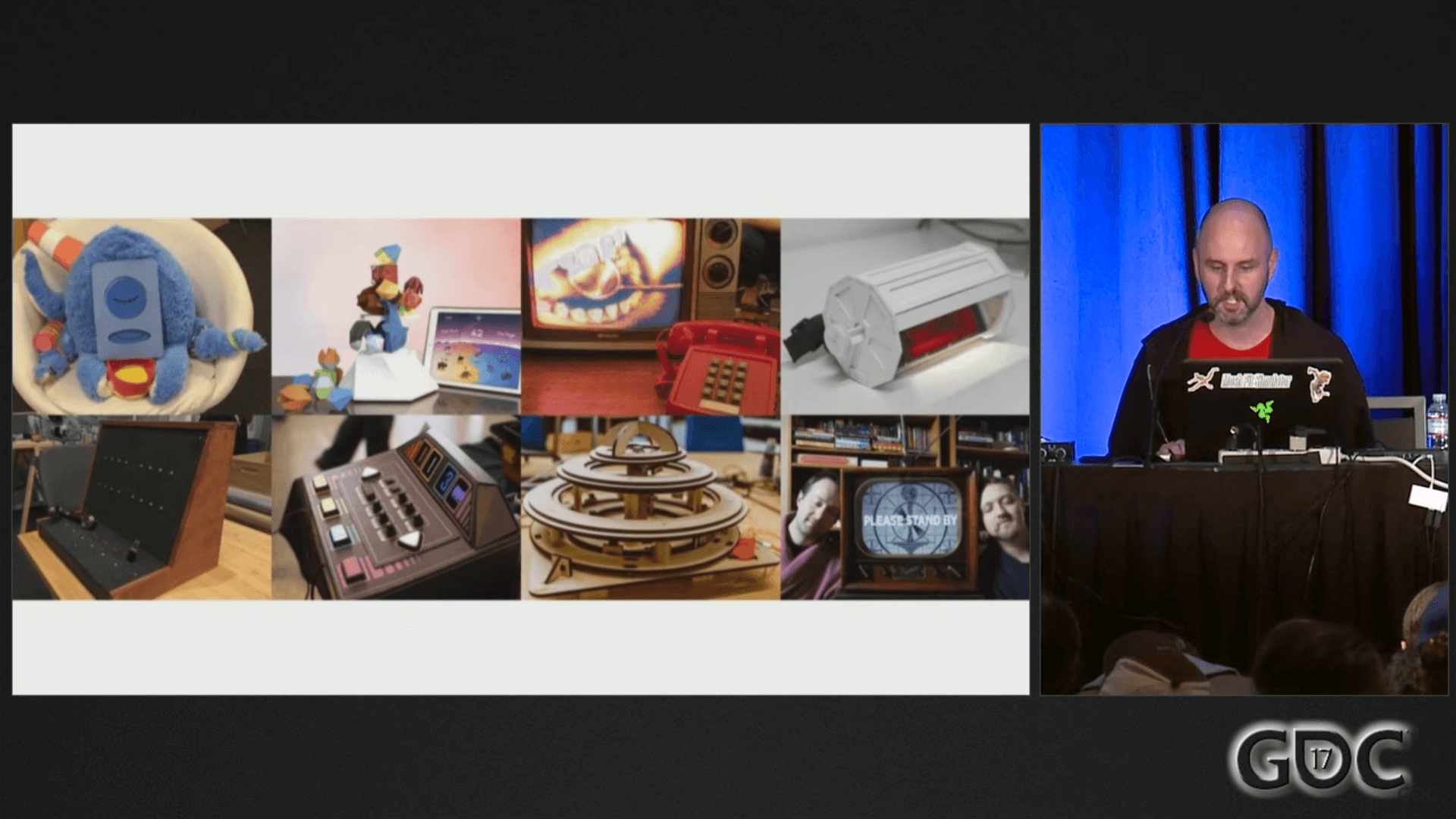 alt.ctrl. is a place that focuses on showcasing the different ways players can actually touch games, by presenting their hand picked findings on unique physical-based controllers.

These controllers aren’t likely to be suitable for well rounded gameplay experiences, but rather to enjoy them in it of themselves for being that unusual.

A DJ player, sand, you name it, it might already be a controller on this exhibit.

Start of All Controllers Exhibit

This Concludes The First Issue of GDCR

There you have it, a plethora of interesting game concepts and mechanics for cleverly designed projects. Which one did you like better? Got any new ideas for your own games? Give it a shot, you can try to get to the next issue of this panel via the GDC Experimental Workshop site.

The decision is yours.

Are you A Game Developer?

Are you a game developer and enjoyed the content? Remember you can always subscribe to the GAME DEVELOPER newsletter for FREE.

Thank you very much, for reading my blog :3

We did it again.

In case you missed it, KNIGHTS was shortly available for free on the Google Play Store.

But don’t worry, because as of today you are able to get PEG COMPLETELY FREE instead!

In case you don’t want to play it right away, you are more than welcome to download and play it later, as free copies will never be revoked.

Well, you can see it for yourself:

Please show some love by spreading the word, leaving a review or purchasing KNIGHTS.

Not going to push anyone to do it of course, only do it if that is what you REALLY want.

Thank you so so much for everything so far. This is a little thank you for your support so far, hope to keep finding ways to show my appreciation towards you guys, you rock!

But also, and as always, thank you so much for reading my blog :3

You Heard It Right

For three days only, you can get the Google Play version of KNIGHTS COMPLETELY FREE! (Unlimited supplies, but still, a one-of-a-kind type of deal).

Want to play it later? Sure, go ahead, you only need to click install and it is yours forever. Just try not to miss it because it will hardly happen again.

What? Never Heard Of The Game?

Not going to blame you, you can catch up here. Or just watch the trailer:

What’s The Catch? Why So Chill About Giving It For Free?

Getting noticed with a premium app on Google Play is hard, especially when you don’t want to include micro-transactions or ads anywhere. If you want to keep your game pure these type of promotion boosts aren’t uncommon, but at the same time will never be frequent, so make use of it!

Of course, you can always show your love for the game (or the developer *wink wink*) by leaving a rating for the app, or purchasing PEG. Up to you really, but would be GREATLY APPRECIATED, TO unhealthy levels even!

But regardless of what you do…

Thank you for showing interest for the game. Even if no “direct” support is received, it is still appreciated. And if you are one of those that bought and enjoyed the game then hey! Glad the work was worth it.

But like always, also thank you so much for reading my blog :3